I paid a visit to the National Film Television School in Beaconsfield last week where I introduced Kurosawa’s ‘Stray Dog‘  to students as part of the Screen Arts course led by Dominic Power (pictured left with me). The movie genre is ‘Gendai Geki’ – which means modern (i.e. set in post-1868 Japan). It deals with crime and social issues in post-war Tokyo under American occupation.

In particular I wanted to highlight composer Hayazaka’s  unusual working relationship with Kurosawa and alert the students to how his use of sound contributes to story-telling.   You can watch a film of the introduction here:

In the title sequence of Stray Dog, the opening shot of a dog’s head, open mouthed and panting, is superimposed by the censor’s number as having been approved. It is important to know that the American Censor forbade any reference whatsoever, good or bad, to the Allied Occupation of Japan. I have written about its particular relevance to the film in an article published in The Final Cut –  the Yearbook of the European Film College in 2005. You can read it here. 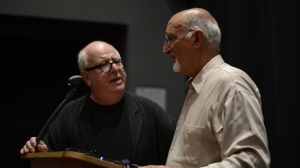 A while ago Dominic invited me to  introduce Kurosawa’s ‘The Bad Sleep Well‘, another Gendai Geki film, as part of Passport to Cinema – the NFTS joint programme with the National Fim Theatre. (The story has references to Hamlet, played by Toshiro Mifune, and  centres on corporate corruption.)

I’d also like to thank Lee Evans for his video and stills photographic services at the event.